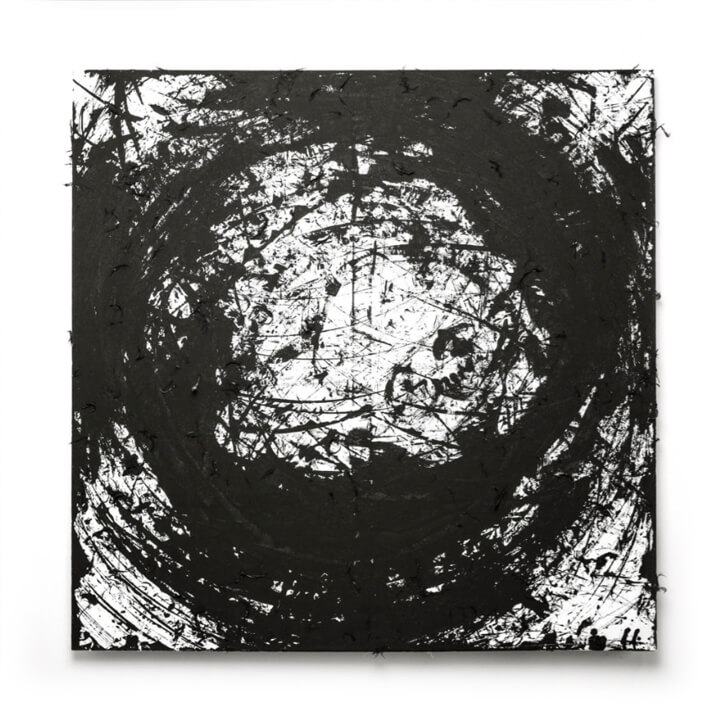 In this body of work, I am utilizing materials such as feathers, rubber and string to create three dimensional, more sculptural pieces. My focus here has shifted from the paint to the material itself and how it interacts with the surface its placed on and with other materials. I am interested in the contradiction, the difference, the manipulation of the materials and how I can make them interact altering their properties to resemble one another.

In the majotiry of the works shown below for example, I use feathers which is a very soft, delicate material and I make it interact with rubber which is the exact opposite. By the choice of color and as I work with them, mixing them with different mediums and pigments, I alter the properties of the feathers to resemble the rubber. The feathers are no longer soft, as in their original state, but have hardened and are rough and even painful to touch. The rubber bike tire which gives the form of the circle is also covered with feathers so it “loses” its original properties. With this body of work, I start working in duets, two paintings at the same time, observing the marks one painting leaves on the other.

I started creating these circular pieces as for almost a year I kept having a very intense image on my mind. The image of being in a forest surrounded by trees.

Its dark. I stand in the middle of the forest looking up in the sky. The trees form a circle around me and all I can see is the light from the moon in the sky.

I was waking up with this image trying to figure out what it meant for me. I wrote a small narrative/poem and named all the circular pieces I created “Untitled”. I wanted them individually to have no title and only when put together in a room and with the poem projected on the wall to all make sense.