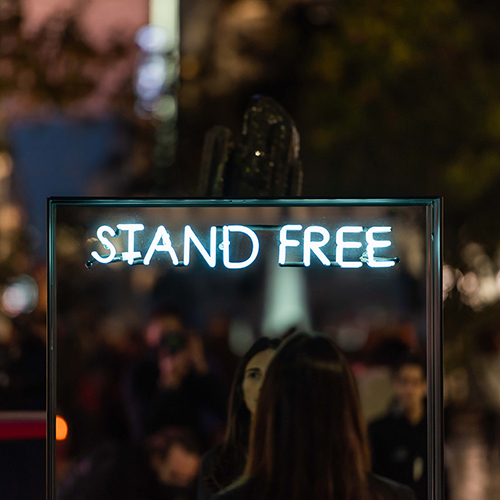 STAND FREE is an interactive installation by artist Maria Fragoudaki dedicated to this year’s 200th anniversary of the Greek Revolution. After its three month presence at the Athens International Airport during the summer, it is transferred for a few days in November to Ermou street close to Syntagma Square, under the auspices of the municipality of Athens.

The installation can be perceived as a visual game that is activated with the participation of the spectator. The installation ‘communicates’ with the audience directly and unexpectedly by being placed in bustling public or private spaces. Its message has a special importance which goes beyond the particular anniversary, since in reality it forms a challenge to the unsuspecting passer-by spectator far bigger than one watching oneself being projected on the reflective surface on which the ‘foustanela’ is placed. Through his involuntarily arrayed with the foustanela reflection, the spectator is invited to consider today’s reality and the way this is made by the national awakening and the struggle of people of older eras. Especially for the Greek spectator, the goal is to reflect upon the significance of freedom.

Though the image seems lightsome or even folkloric, it is at the same time familiar and strange. The spectator watching himself wearing over his clothes the foustanela, is led to observations that are related to the present and also to the common identity and memory, occasioned by the 200th anniversary from the beginning of the Greek revolution. The artist’s intention is to remind, in a non-didactic way, the common past and values that have been inscribed on the collective unconscious of modern Greeks, values that once united them and led them to revolution, liberation and the foundation of the Greek state.

The emblematic element of the male national uniform which today is worn exclusively by the Evzoni –the presidential guard- is used in order to establish this connection. Although at first was not exclusively a Greek dress, this uniform now carries a special national and symbolic load. The ‘foustanela’ has 400 pleats which symbolize the 4 centuries of Ottoman rule. The length of this traditional uniform is about 50 cm, though it can vary from 35 to 65 cm, while its white colour stands for the sacredness and purity of the liberating battles. The struggle of 1821 was the precondition for the modern Greeks to stand “on their feet”. To stand Free.

Besides its connection with the 1821 Revolution, the foustanela and the national uniform has functioned as a symbol and a call to freedom for other people and other historical periods, as in 1940 when Elly Sougioultzoglou-Seraidari’s (known as Nelly) photograph with the bugler evzone and the Acropolis at the background became the cover of ‘LIFE’ magazine. It was then that it became an international symbol of resistance against any attempt to breach freedom.

Maria Fragoudaki’s work, now placed at the most famous commercial road of Athens, facing Syntagma square and the Greek parliament, without any explanations and obvious historical references, captures the image of the passer-by regardless of nationality, gender and age. Through the mirror, the pictured can ‘appropriate’ the national costume and feel besieged or liberated. For him or her, the foustanela turns into a time capsule which connects him with the past, either his own or a foreign one.

With the recorded message that accompanies via the internet –through QR code- the installation, the spectator converses with himself and the environment, activates his or her experiences and is guided to a condition that affects, concerns or simply amuses him. His emotional involvement depends on his perceptions, conscience, sensitivity and involvement with the history of the country. With his or her participation and reaction the work is completed and the interactive nature of the project is materialized which in any case allows for the order to be heard: Stand Free. 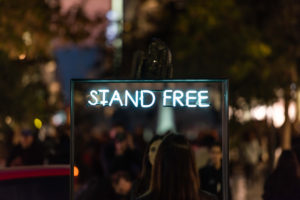 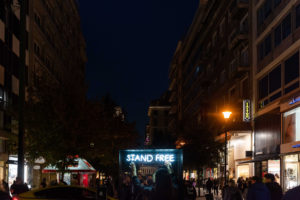 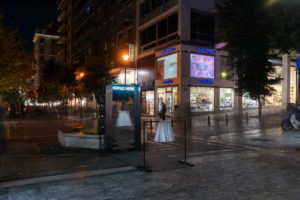 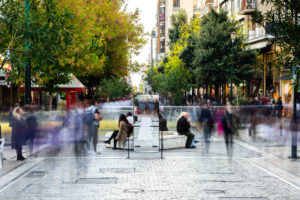